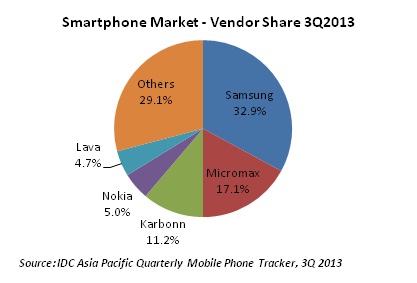 The IDC’s Q3 2013 report for Indian phone market gives 5% market share to Windows Phone. It puts Nokia as the 4th largest smartphone vendor. These stats actually don’t do justice to kind of popularity Lumia is enjoying in India. You can actually spot many Lumias in one day. IDC also recognizes the Lumia popularity and predicts positive growth trajectory in coming quarters.

The Lumia range of devices continued to show a growth trajectory in 3Q2013 and garnered close to 5% market share – the trend is expected to continue with greater support from Microsoft in the coming quarters. The third quarter of 2013 saw a few notable launches like the Lumia 625 and Lumia 925 which have been able to generate positive interest from consumers and developers alike.

Nokia has seen some slide in overall phone market share with the share of feature phones sliding further to make 81% of the total market in 3Q13 and smartphone share growing by 229% YoY. It still is the second top phone vendor with 14.7% market share.

The 5.0inch-6.99inch screen size smartphones (phablets) continued to show sustained growth in 3Q2013 as well – the phablet category contributed to 23% in the overall market in terms of volume.

The overall mobile phone market (Feature Phones and Smartphones) had a 12% growth YoY and a 7% growth quarter over quarter (QoQ) with the share of feature phones sliding further to make 81% of the total market in 3Q13 despite the feature phone market growing at 3% in 3Q2013 over 2Q2013.

With Phablets sales showing sustained growth and contributing to 23% of overall smartphone sales in Q3, it may be great idea for Nokia to bring its two Phablets and especially Lumia 1320 soon to Indian market.