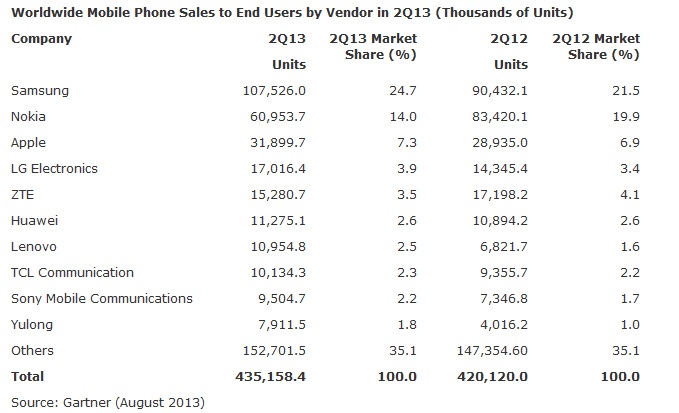 Gartner ‘s data for Q2 is out and they also mention that WP has finally overtaken Blackberry as 3rd major OS with 3.3% smartphone market share and 7.4 million unit shipments. They even mention Nokia selling nearly 0.6 million Symbian devices in Q2. As Gartner measures the devices sold to end users hence the differences appear from official sales data released by manufacturers.

It is still good to see Nokia having 14% of mobile phones market share, though Samsung has solidified its top ranking. But as Gartner mentions Lumia sales which has seen 112% growth over Q2 2012, may see further boost in second half of 2013.

Slowing demand of feature phone sales across many markets worldwide, and fierce competition in the smartphone segment, affected Nokia’s mobile phone sales in the second quarter of 2013. Nokia’s mobile phone sales totaled 61 million units, down from 83 million units a year ago. Nokia’s Lumia sales grew 112.7 percent in the second quarter of 2013 thanks to its expanded Lumia portfolio, which now include Lumia 520 and Lumia 720. “With the recent announcement of the Lumia 1020, Nokia has built a wide portfolio of devices at multiple price points, which should boost Lumia sales in the second half of 2013,” said Mr. Gupta. “However, Nokia is facing tough competition from Android devices, especially from regional and Chinese manufacturers which are more aggressive in terms of price points.”