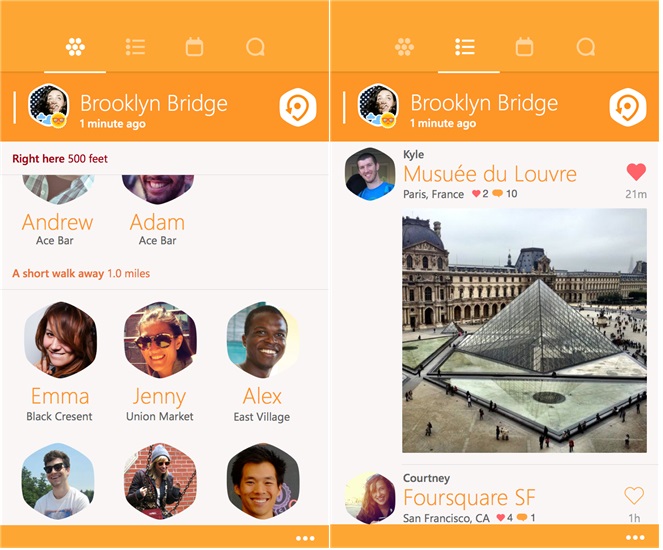 Foursqaure has finally brought its “Swarm” check-in service to Windows Phone after iOS and Android. One can find nearby friends and message them all using the Swarm app.

Swarm, the new app from Foursquare, is the fastest way to keep up and meet up with your friends. With Swarm, you can easily see who’s out nearby and who wants to hang out later.

– Want to meet up with friends? Quickly open up the app to see who is out nearby.
– Want to share what you’re doing? Checking in is faster and more fun than ever.
– Got an idea for something fun to do? Easily message all of your nearby friends.

Angry Birds Space has added 40 new levels in its biggest update yet. Catch the full details below,

BEAK IMPACT – OUR BIGGEST UPDATE EVER!

Strap in and get ready for launch – it’s the biggest Angry Birds Space update ever! To celebrate over two years of epic intergalactic adventure, the all-new BEAK IMPACT episode has a whopping 40 new levels, plus another 10 bonus ones! Think you can master them all?

40 NEW LEVELS! There are two parts, each with 20 interstellar levels! Unlock Part 2 by getting all the stars in Part 1, or with an in-app purchase!

6 BONUS LEVELS! Each part has three bonus levels! But you’ll have to get three stars and a feather on each level to unlock them all – are you up to the challenge?

SEND IN THE MIGHTY BUZZARD! Buzz Aldrin, the legendary astronaut and moonwalker, is at hand to save the day if things get tough!

ASTEROID SHOWER! Navigate burning, freezing and radioactive space rocks – and look out for some strange things happening to those pigs!

GAS TANKS AND BATTERIES! The pigs have kitted out their structures and contraptions with some unstable energy cells – try giving them a nudge!

Viber, the popular messaging app has also been updated with new default background and bug fixes.