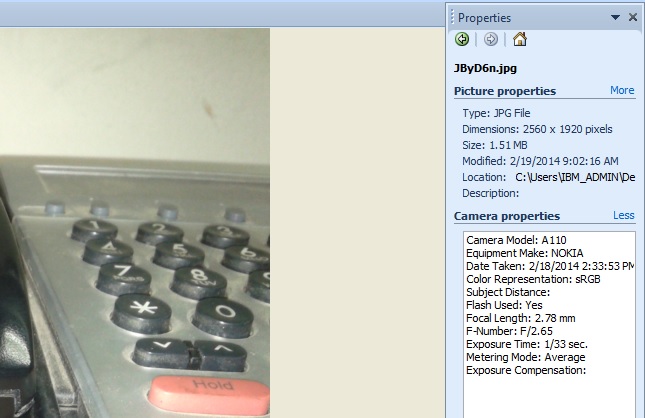 A image captured with Nokia X surfaces online and it confirms beyond doubt the 5 MP camera of Nokia X with image resolution of 2560×1920 as seen in the above screenshot. The device is named A110 in Exif and our readers would know that Nokia X appeared first in AnTuTu benchmarking as A110, which we reported exclusively. It too had confirmed 5 MP cam, 854×480 resolution and Android KitKat 4.4.1.

The 5 MP camera on Nokia X will be a fixed-focus camera, as per our knowledge, but still being Nokia, it should be range-leading in quality, as we have on likes of Asha 501. Some, confusions arose when we saw 3 MP camera in data of Camspeed, but we were still of the opinion that we may have seen some prototype.

Anyways, below is the leaked sample. Click here for full-size image.

Thanks Hitesh for the Tip. Cheers!!