Skip to content
You are here
Home > Latest Posts > evleaks says Nokia EOS may be called Nokia 909 and not Lumia 1020 as reported earlier! We wonder, if it is Lumia 990? 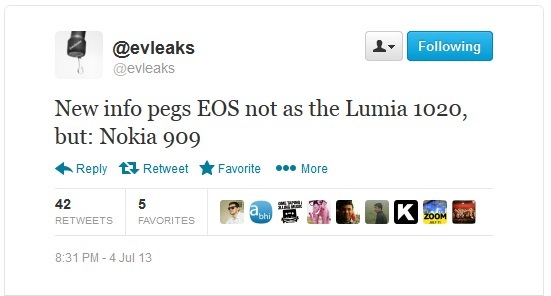 The Lumia 1020 name for Nokia EOS was bit of a surprise as it meant big jump in specs and processing power. But, now what evleaks is reporting is not a bit less surprising. They mention that EOS will be called just Nokia 909, which may also mean Lumia 909. Now, it looks really  dubious. For, one Nokia will not devalue it by sorting it into Lumia hierarchy lower than Lumia 920, when it will be a big upgrade imaging wise. Also, as a next flagship it will not be named 909 as per our info goes.

Anyways, we got tipped by an anonymous tipster sometime back about EOS being called Lumia 990, but I didn’t report it, due to lack of any evidence or info from our sources. So, did evleaks get it wrong and is it Lumia 990?