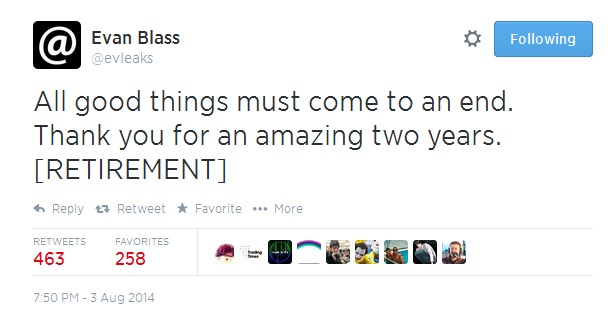 A very surprising move by perhaps the most notorious Tech leaksters ever. Evan Blass, the man behind @evleaks has first changed the account user name to “Evan Blass” and now has announced retirement all of a sudden. His Tweet reads,

All good things must come to an end. Thank you for an amazing two years. [RETIREMENT]

Evan Blass started his career with Engadget and later moved to PocketNow, finally leaving his job, to become @evleaks. He revealed his true identity only last year. One thing has been common across all his job assignments, his amazing credential as a leakster.

I still remember him leaking some Symbian devices, Lumia 610 and Lumia 900 before their announcement by Nokia and at that time he was with PocketNow.

Anyways, what do you think made him retire? My gut feel says he may have decided to join some reputed name like “Engadget”. If this comes true, I will let you know why I think so 🙂 .