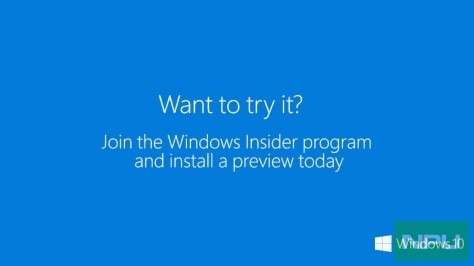 Today Windows 10 turns 1. On this day last year Microsoft officially launched Windows 10 publicly. And since last one year Windows 10 has received many updates, most of them commutative updates and some of them were major one like November update. These updates were packed with many fixes & improvements for bugs, which were reported by Windows insiders. And also on August 2, Windows 10 is going to get its another next big update called Windows 10 Anniversary Update.

On the eve of Anniversary of Windows 10, Dona Sarkar, head of insider program at Microsoft shares some ideas about future of insider program. Company wants to integrate more deeply with insiders to make Windows 10 ecosystem more better & better so that you can use it more efficiently, more productively to get things done. Company wants to make Windows 10 more cool so that it will help you, whatever you are trying to achieve.

We want to evolve the program to engage even deeper with our Insiders. We want to gain a greater understanding on what people are trying to achieve whether its starting a business, creating art, learning a skill, or building a career and how Windows can help

Along with this, Dona sarkar announced that company is planning a new global event called #WINsiders4Good, where local (nearby to each other) Windows insiders will meet each other.

Something else we’re looking to do this year is a series of global “Create-A-Thons” called #WINsiders4Good to help Insiders within a city get to know each other and build something for local impact. We are starting in Seattle on August 2nd to celebrate the beginning of the global rollout of the Anniversary Update.

Finally company confirmed that there will be builds after August 2 (mostly about Redstone 2) and will continue to make Windows 10 more better and better.

For those of you who love installing new builds – don’t worry, we’ll be pushing out new builds again in August! Thank you for an extraordinary year. We can’t wait to continue to build Windows together.