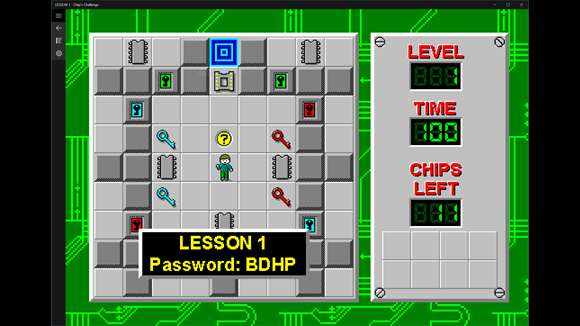 Chip’s Challenge is a top-down tile-based puzzle video game originally published in 1989 by Epyx as a launch title for the Atari Lynx. Now this game is available for Windows 10 mobile.

Gameplay involves using arrow keys, directional pad or mouse to move Chip about each of the levels in turn, collecting enough chips to open the chip socket at the end of each level, get to the exit, and move on to the next level.

149 increasingly difficult levels, including a few hidden ones, await Chip in this tile-based puzzle game. Use tools such as keys, and special shoes to bypass obstacles. Manipulate switches to and use dirt blocks to build bridges across waterways. Avoid enemy creatures, grab all the computer chips in the level, and hurry to the exit: On top of everything else, there’s a time limit!

Best part of this game is that it is free. So dont miss the chance and download it now from the given link below.