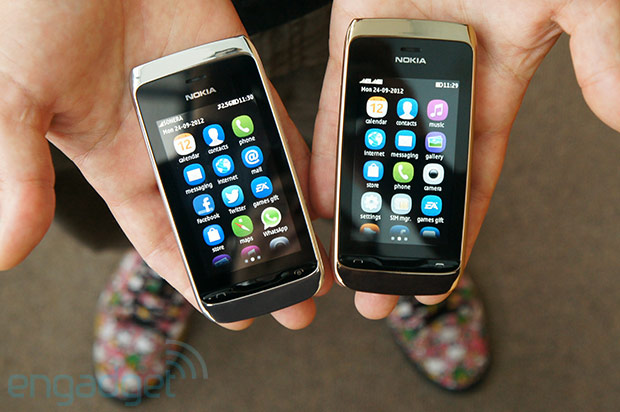 Engadget has posted a hands-on video and impressions of today launched Asha 308 and 309 phones. They seem impressed with performance of the two phones operating at 800 MHz :).

But poke around the MeeGo-like swipe interface for a few minutes and you’ll be impressed by a surprising level of responsiveness that belies the humble 800MHz processor inside.Navigation through the interface was rather fluid and apps seemed to launch with an appreciable amount of speed, though we did witness some extended loading times.

In another mention-worthy news, Nokia has informed that Full-touch Asha phones have been now classified as smartphones by global market research companies and analysts such as GfK and IDC.

The new devices offer a fluid ‘swipe’ user interface and an open environment for third-party app development – characteristics that have earned the complete Asha Touch range full smartphone classification from global market research companies and analysts such as GfK and IDC.

Great to see Nokia’s S40 OS going places with new UI and eco-system. Actually , it always was the robust and versatile, yet least cost and labour intensive OS that Nokia could have used for the lowest end smartphones.