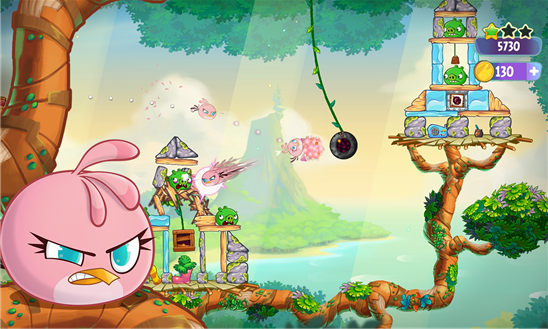 Many new smartphone users, kids and others love to play with Angry Birds Stella on their devices. This application which was available till now only for iPhones and Android phones  , is now coming officially to your Windows phones. Best part is that it is free over windows phone store but there are optional in-app purchases available.

Join Stella and her super adventurous friends on a quest to protect Golden Island from the greedy Bad Princess and her clueless piggies! Meet this fierce new bunch, master their amazing superpowers, and play over 120 action-packed levels!

Stella has teamed up with Dahlia, Poppy, Willow and Luca – the newest flock on the block! These fearless pals have a strong bond but even stronger personalities. You could even say they’re best friends forever… most of the time.

But now these brave birds need to pull together and fight to save the island from Gale, the Bad Princess who’s stolen their scrapbook and is destroying their magical home.

It’s an all-new physics-based slingshot adventure – get ready to get fierce!

– PLAY OVER 120 LEVELS! Slingshot your way through the treetops of Golden Island!
– MEET THE FIERCE FLOCK! Six fun birds with unique personalities!
– MASTER THE MOVES! New kick-ass superpowers – tap and hold to target attacks!
– STOP BAD PRINCESS! Her pesky piggies are wreaking havoc across the island!
– COMPLETE YOUR SCRAPBOOK! Collect pics and wacky outfits to use in the game!
– SEE FRIENDS’ SCORES! Then try to beat them (but don’t fall out!)
– SCAN YOUR TELEPODS! Bring extra-special birds into the game!
– ENJOY LUSH GRAPHICS! Vivid visuals that put the “gold” in Golden Island!