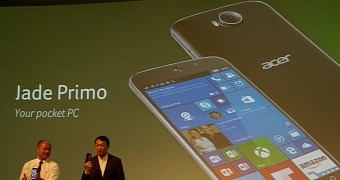 Few days to go for Microsoft event were they are expected to announce a long-awaited flagship Lumia, however all details of both flagship phone already leaked into the internet even the real images of both flagships leaked out.

We know 95 percent of Windows Phone market share is covered by Microsoft and we know that Lumia 950 and Lumia 950 XL will be better compared to Acer Jade Primo  handset.

This IFA when whole world shocked to see an Acer’s Windows 10 Mobile the Jade Primo which runs Windows 10 Mobile. And it was not a cheap Windows Mobile from Acer, It runs 808 snapdragon chip on board and boost with 2 GB ram, Aside of this Acer’s Jade Primo have a large 5.5-inch display with full HD (1080p) support. If you are a camera addict then Acer have packed some more good things, Jade Primo includes 21-megapixel on back and 8-megapixel camera in the front.

We know that Microsoft upcoming flagships are going to be expensive such as iPhone 6. However the Jade Primo is not expensive, it cost around $300, As of now the device is expected to release after Windows 10 Mobile releases, which is expected later this year.

Acer also offers Predator series of devices, Which includes high-end models too. Acer’s President, ST Liu said that they will continue to support Windows Phone and to launch high-end handsets powered by Windows 10 Mobile early next year in an interview for Digitimes

Acer: “Currently, a majority of our models are priced below US$199. But we have also been trying to ramp up the ASP of our products by introducing flagship models priced over US$300 per year.

Acer President even said “We launched the flagship Jade Primo in 2015 and plan to release two flagships, the Predator 6 and the Jade Primo 2 in 2016”