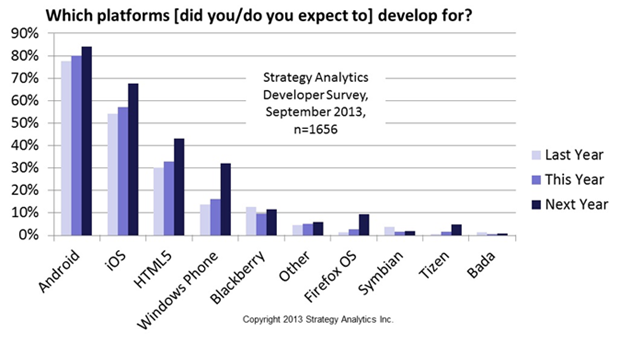 A recent Strategy Analytics survey has revealed that 32% of 1600 active developers, who participated in the poll as part of the survey will develop for Windows Phone platform. This marks a jump of 100% in developer interest as compared to last year figure of 16%. This survey has been conducted in September 2013 and may very well indicate the arrival of Windows Phone as 3rd eco-system and developers have it on their minds now.

Android and iOS still are the top platforms with 84% and 68% developer wishing to support them but that boils down to already huge installed user base for these platforms. Nice to see Windows Phone playing the catch up game impressively.

Anyways, while in recent few days we have seen a flurry of top apps like Vine, Instagram, Waze etc coming to WP store, the no. of total applications in the store that has also grown to 190,000 as well. This rise in interest can also be contributed to some of the steps taken by MS, which has seen,

GDR3 availability for enthusiasts free of cost via App studio