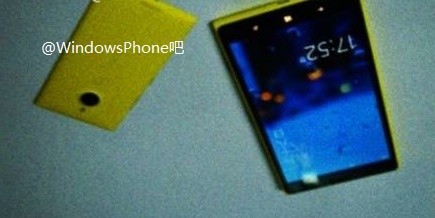 Well the title really says it all, a photo was recently posted showing a Lumia 1520 next to what looks like a mini version of itself.  Well the rumor is that a Lumia 1520 mini or Lumia 1520V will release after Windows Phone 8.1 is announced.

Spec sheet is supposed to pack a 4.3 inch 1080p display on an AMOLED panel, 2GB of RAM, 32 Gig storage without expandable memory, 3000 mAh battery, and a 14 MP camera.  The word on the processor is still up in the air, but with the other specs like the 1080p display it will probably be a beefy processor.

I hope this rumor turns out to be true, it would be great for Windows Phone to have some high end options without having to have a monster size phone like the 1520, but what I am really hoping for is that this is Nokia’s answer to Google’s nexus line.  Meaning that Nokia wanted to bring us a high end smartphone with good specs and a comfortable retail price.  I personally think that is what this phone is, the smaller screen size and the bump down on the camera size hint that Nokia is trying to keep the price down, but still give us a winner of a smartphone.  That is just my thoughts though.

Let us know what you think.