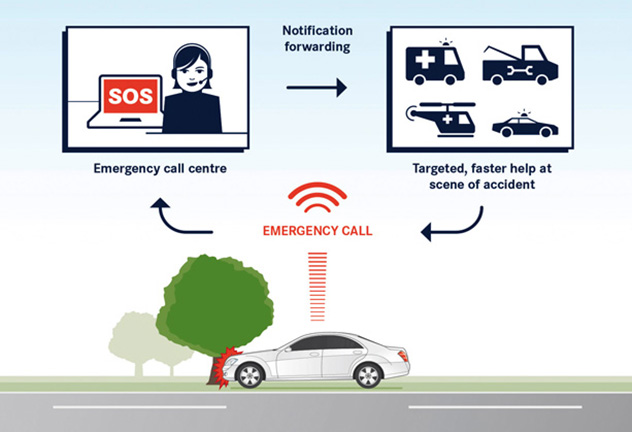 HERE Maps powers most of cars’ navigation systems around the world and in 2013, HERE has powered more than 10 million new cars.

Mercedes-Benz has now chosen HERE Maps to power the emergency call eCall system in its cars. eCall is an European Commission initiative that will require cars to be capable of making emergency calls in the event of a crash. This does look like a very important initiative and may prove to be lifesaver for thousands, especially, when drivers and passengers lose their consciousness due to crash.

This can be through a manual emergency button or automatic. In these cases, if the airbag or the belt tensioners are deployed, it sends a text message to an emergency call centre providing the location of the vehicle and its registration number.

If the driver and any passengers are unconscious, in shock or otherwise unable to make a call themselves, then it’s very clear why this could be a lifesaver.

The Commission believes that a European eCall mandate has the potential to save up to 2500 lives a year, by getting help to injured people quicker, as well as reducing the severity of tens of thousands of other injuries through swifter treatment.

The European commission hopes to make eCall mandatory on all new cars from 2015. Russia and North America are also introducing similar systems, through government and private initiatives.

HERE has been supplying map data across 19 European countries to Mercedes-Benz . So, while Merc’s eCall system was already using this data from start, now it will leverage the HERE Location Platform.