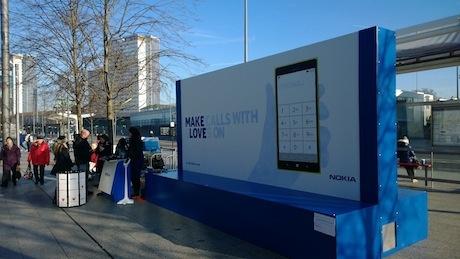 Nokia marketing has been experimenting with interesting forms of outdoor marketing lately. They have now launched temperature sensitive or what is known as thermo-reactive ads to drive home the usefulness of Supersensitive touchscreen of Lumias, which makes Lumia breeze to use even with gloves on.

The ads will appear with Messages such as “Make Love”, “Send Love”, Make Calls with Gloves in” and “Send Texts with Gloves on”, as the temperature drops or rises. This is a part of “Glove love” campaign which is a Nokia initiative to reduce the Glove waste. Read more below,

The Cohn & Wolfe-created “Glove Love” campaign stems from Nokia’s CSR tie-up with “Do the Right Thing”, a matchmaking service for single gloves. It aims to reduce the waste created by sending single gloves to landfill sites by repurposing those handed in and pairing them with other single gloves to be used again.

As part of the campaign, the first 100 fans to arrive at London’s Westfield and Old Truman Brewery ad sites and donate a single glove to Nokia will be given a pair of gloves. A further 100 people per location will be sent a pair of gloves to an address of their choice.

Thanks Notre for the tip. Cheers!!