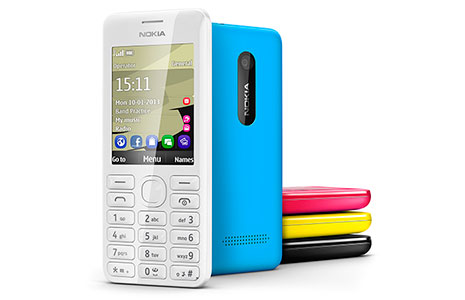 Nokia has today launched two entry-level phones Asha 205 and Nokia 206 today. Both have good looks and come in “Single SIM” and “Double SIM” variants. Asha 205 comes with a Facebook button and a Qwerty keyboard. Nokia is promoting it as the “Most social ever”. Nokia 206 comes with similar 2.4-inch screen size as of Asha 205, but  with traditional keypad and design cues directly lifted from Lumia line up. Check the design of Nokia 206 above.The Nokia 206 comes in cyan, black, white, magenta and yellow.

There is one new feature with which Nokia has equipped both the devices called “Slam” share feature. Nokia Slam technology uses Bluetooth for transmission, but doesn’t require you to pair the two phones.

Asha 205 is also a looker. The Nokia Asha 205 comes in cyan, magenta and orange, with stylish two-tone mixes.

Nokia 206 comes with Facebook, as well as email. WhatsApp ( in the single SIM version) and eBuddy are pre-installed, and there’s a gift pack of ten premium entertainment titles to download. Asha 205 has  Facebook, Twitter and eBuddy apps pre-installed. There’s also the very popular EA gift pack of 40 free premium games (worth around €75, depending on the market) to download and keep forever. Both also come with Nokia Xpress Browser installed, which uses cloud compression to reduce data consumption by 90 per cent.