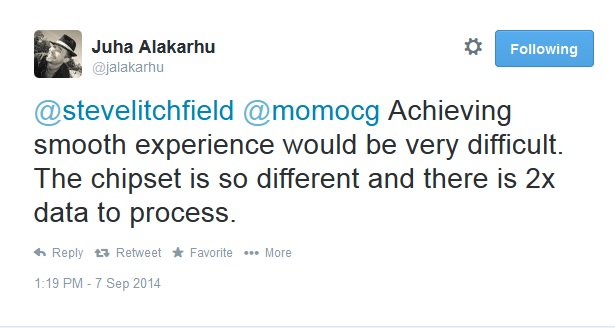 While it has been made clear in official posts that all awesome features of Lumia Denim and Lumia camera like Moment capture, Dynamic flash, 4K video, Auto HDR are only meant for Lumia 930, Lumia 1520, Lumia Icon and Lumia 830. But, worse news is that even the camera speed improvements are not coming to Lumia 1020 as of now. The above tweet from Juha confirms that the processing power of last-gen S4 processors used in Lumia 1020 may be the culprit.

Though, we tried to find out and can share that the Lumia 830‘s Moment capture ( Full HD, 2-megapixel per frame quality) may makes its way to older devices later. Don’t ask, when?

Read all about Lumia Denim and Windows Phone 8.1 update 1 at our dedicated page.