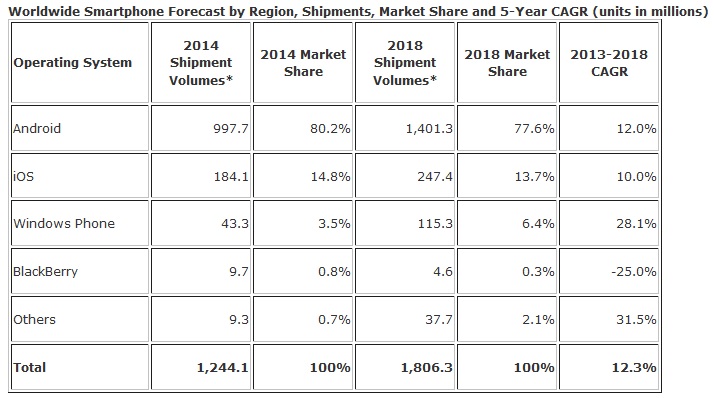 Windows Phone continues to slowly build its global footprint, and growth is expected to outpace the market throughout the forecast period. In 2014, volumes are expected to grow 29.5% over 2013, reaching 43.3 million shipments. This momentum is expected to continue into 2015, reaching 65.9 million units, continuing on to 115.3 million in 2018. It is somewhat unclear what Microsoft has in store for its recent acquisition of Nokia, but an additional positive is the number of new OEM partners recently announced. At Microsoft’s Build conference this year, the company announced a number of key features that had been visibly absent from the platform in the past. If more OEMs get behind the platform, and device portfolios continue to scale the cost spectrum, Windows Phone can continue to gain momentum.

While predicted volume for 2014 looks feasible, the 2015 and 2018 predictions look pretty conservative in light of Microsoft making Windows Phone free and many new OEMs coming on-board.