Skip to content
You are here
Home > Latest Posts > IDC: @Nokia back as top mobile phone manufacturer in Finland with 36% share at the expense of @Apple. 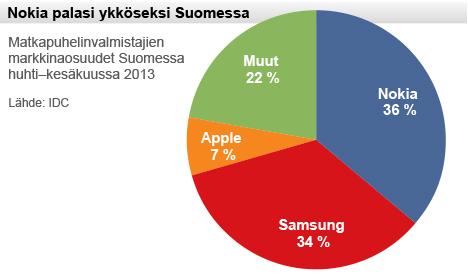 Latest IDC data says that Nokia is back as top mobile phone manufacturer in Q2 on its home-turf after losing out to Samsung in Q1. It has 36% share of phones sale volume followed closely by Samsung at 34%. This growth for Nokia has been driven by its expanded Lumia range and has come at expense of Apple whose share tumbled from 14% in Q1 to 7% in Q2. From, the translated article,

One important observation of IDC’s figures is that Apple’s share of the Finnish mobile phone sales are skyrocketing, drift through corners. The company had a market share of 14% in the first quarter of the year yet, but in the April-June, it was cut to 7%. Nokia’s return to the top spot was, therefore, at the expense of Apple.

The Finnish operators mention that the growth is driven by the expansion of Lumia range and its ability to address more price points,

Nokia’s phone sales, the Finnish telecommunications operators, in particular, was driven by reviving, according to Lumia range expansion.

– Nokia’s problem has long been the narrowness of the range, but now it’s getting better all the time with new models, DNA, Managing Director of the Sami in the desert says It week.

– Nokia has got the whole range, from the Lumia come with a lot of new devices, TeliaSonera’s Communications Director Timo Saxén plays.