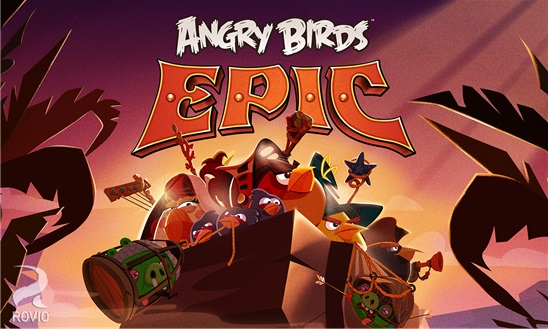 Windows Phone gamers have really lots to cheer nowadays with most of the renowned titles making their way to Windows Phone store sooner or later. Especially, some of the big title makers like Rovio have been really quick in bringing their latest games to Windows Phone. Rovio has made Angry Birds’ latest installment known as “Epic” now available for Windows Phone users and great news is it being free to play. Have a look at the feature set below,

Get ready for a bird-tastic FREE RPG adventure filled with “weapons” (whatever they could get ahold of), magic, bad guys and silly hats! Lead your feathery team into battle now – it’s going to be EPIC!

EPIC BATTLES! Turn-based battles between our heroic flock of warriors and those green snout-nosed scoundrels! It’s easy to play, but difficult to master!

EPIC WORLDS! Explore a fantasy Piggy Island with everything from tribal villages and frosty mountains to tropical beaches and mysterious caves!

EPIC CHARACTERS! Join Red, Chuck, Bomb and the other heroes as they face King Pig, Wiz Pig, Prince Porky and many more villains!

EPIC UPGRADES! Level up your characters, armor, weapons and potions to become a legendary hero ready to take on the mightiest pig warrior!

EPIC WEAPONS! Craft amazing battle-winning weapons like a wooden sword, frying pan or stick thingy with a sponge on top!

EPIC HUMOR! Plenty of offbeat humor and tons of quirky characters dressed in awesomely silly costumes – like a prickly cactus hat and a matching sword.